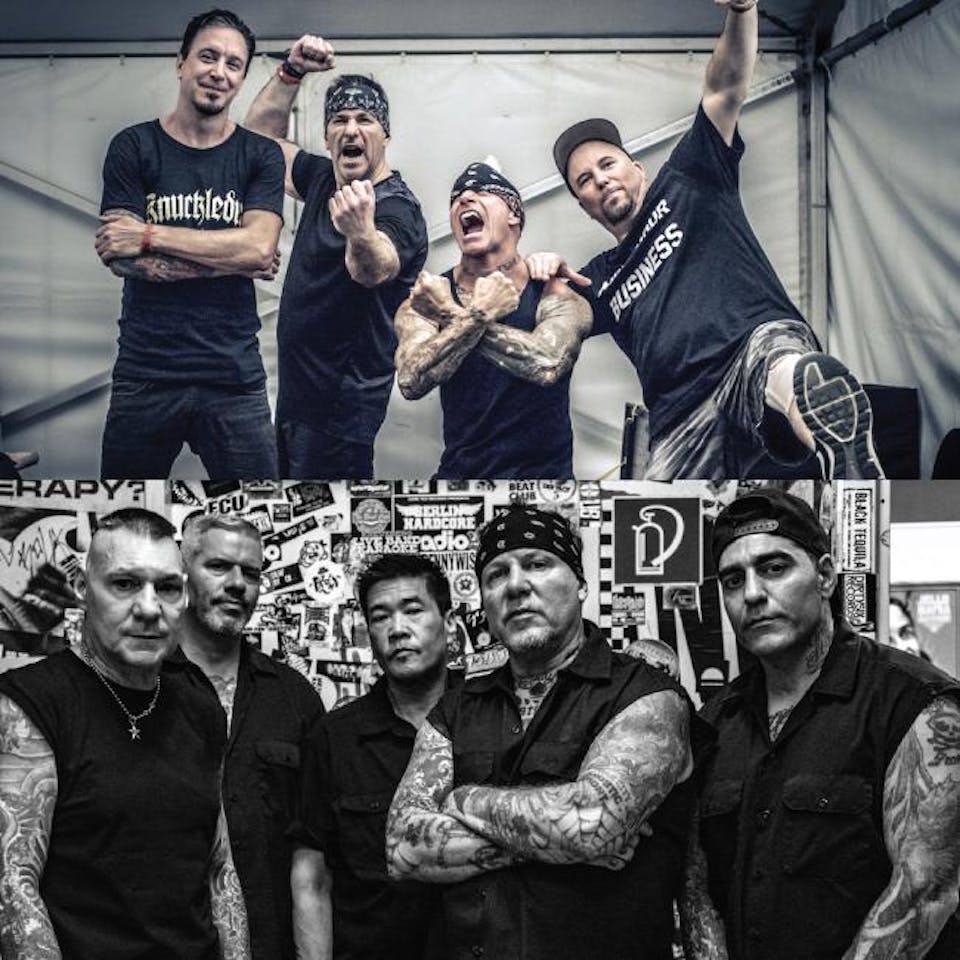 Sick Of It All

SICK OF IT ALL

New York City hardcore legends SICK OF IT ALL aren’t slowing down with age, the long-standing quartet are still pissed off, and the genre stalwarts still see many years ahead. SICK OF IT ALL remain a beacon of continuity, integrity, and resolve. That’s good news for SICK OF IT ALL fans and the hardcore scene. Since forming in 1986, SICK OF IT ALL have traveled the world many times over, played in front of hundreds of thousands, and released 11 acclaimed full-length albums, the latest of which is the riotous if anthemic Wake the Sleeping Dragon!. That SICK OF IT ALL continue to live by the standards in their original charter isn’t a matter of course, it’s part of their respective DNA. Hardcore is SICK OF IT ALL. “We’re a band that thrives from frustration,” says drummer Armand Majidi. “Aging seems to work well with our message, as opposed to a good-time band who sings about partying all night. There are so many horrible aspects of the world that become more obvious to us year after year, which we didn’t see or understand before, which fuel our frustration every day. We’ve lived long enough now to see through the matrix, and thank goodness we have this band, so we can vent about it.”

And SICK OF IT ALL will voice, express, and declare their anger. As with pivotal albums Blood, Sweat and No Tears (1989), Scratch the Surface (1994), and The Last Act of Defiance (2014), the New Yorkers aren’t afraid to cut the crap on Wake the Sleeping Dragon!. Written and arranged with friend and producer The Jerry Farley (Lamb Of God, Every Time I Die)—a first—opener “Inner Vision,” “Robert Moses Was A Racist,” “Hardcore Horseshoe,” and “The Snake (Break Free)” retain SICK OF IT ALL’s signature sound but add melody, heaviness, and speed to the equation. Guest vocals by Tim McIlrath and Chuck Ragan add a new dynamic as well. Across Wake the Sleeping Dragon!’s 17 songs, SICK OF IT ALL have an album that observes tradition but has its eye on the future. “We didn’t shy away from stronger melodies on this album,” Majidi says. “So, there are some strikingly musical moments. Basically, we chose not to limit ourselves. The songs stand apart from each other by representing many different musical styles that have influenced us.”

On Wake the Sleeping Dragon!, SICK OF IT ALL opted to change up the lyrical approach. While daily frustrations, political idiocy, war, power imbalances, and general inequality have long fueled SICK OF IT ALL’s no-bullshit lyrics—the album title Wake the Sleeping Dragon! refers to a protest mechanism—today they’re focusing on the bigger picture while also injecting a bit of levity into the songs. “On this record, we had a more open, communal, tongue-in-cheek approach to lyric writing,” says Majidi. “So many different topics were covered, some way more lighthearted than others. We’ve done ‘serious’ so often, that what might stand out most to people is how much fun we had with the lyrics. It’s always time for revolution, so that message is loud and clear on multiple songs, but we also sing about musical heroes like the Bad Brains (‘That Crazy White Boy Shit’), inner demons (‘The Snake (Break Free.)’), our distaste of animal abuse (‘Bull’s Anthem’), annoying narcissism on social media, friends we’ve lost, life on the road, impending wars for resources, as well as mosh pit patterns that can be linked to male pattern baldness. We’ve allowed ourselves greater lyrical freedom on this record for sure!”

For the cover, SICK OF IT ALL wanted it to tie directly into the lyrics. Designed by Ernie Parada from Hellgate Industries but inspired by Lou Koller and Parada’s ‘50s era monster movie poster idea, the cover to Wake the Sleeping Dragon! is striking in its use of yellows, oranges, reds, and black. That it also brings in SICK OF IT ALL’s Alleyway Dragon mascot captures not just the mind but part of the band’s history as well. “Lou and Ernie came up with the idea of doing monster-movie styled art as the cover,” Majidi says. “The dragon climbing the Empire State was a concept I always wanted to see brought to life, so the two ideas were destined to come together this way.  I love the fact that although it’s the same artist, there’s no obvious aspect linking Ernie’s style from his first cover (2010’s Based On A True Story) to this one.”

Wake the Sleeping Dragon! was put to proverbial tape by The Jerry Farley at Nova Studios in Staten Island, New York over two weeks and a half, while Danish producer Tue Madsen (Meshuggah, The Haunted) mixed and mastered SICK OF IT ALL’s latest rager at Antfarm Studios in Aabyhøj, Denmark. What helped the process run smoothly was Farley’s early involvement, the two five-day pre-production sessions, and the ability to record as SICK OF IT ALL progressed with the songwriting. “The Jerry Farley also became a very important part of the creation of this album,” Majidi says. “This is the first time we’ve ever had a producer involved from start to finish, including the songwriting process. His objective viewpoints helped settle a lot of little issues that could have easily become stumbling blocks, and the songs themselves ended up benefitting from them. SICK OF IT ALL and Tue Madsen have maintained a long-lasting relationship based on understanding, friendship, and most importantly, good results—three factors any band would be very happy with.”

As for SICK OF IT ALL’s next steps, the picture is clear. Majidi and team are looking for a warm reception to Wake the Sleeping Dragon! and more rounds of tours around the globe. The sleeping dragon is awakening! And SICK OF IT ALL want you to join the rebellion!

A Godfather figure is understood to be a purveyor of genre; a pioneer in a particular realm of creation. Perhaps more importantly, and after over 3 decades molding the Hardcore realm, AGNOSTIC FRONT have protected and nurtured Hardcore music in such a way that it still exists healthily & in its proper form, today. As a band that has cultivated their reputation with honesty, and that prioritizes affirming their social messages to the world, GET LOUD! is well suited as the title for their 12th, full length studio album. Although the sociopolitical climate has transformed considerably since the release of the  United Blood  EP in 1983, the basic concepts of political corruption and social unrest have only been enhanced, and with them the fuel on AGNOSTIC FRONT’s fire. “We’ve always had a voice; had a lot to say. We’re always screaming for a change” says frontman Roger Miret. “Speak up, get loud, say what you have to say. Be the change you want to see in the world. You can’t change the whole thing, but you can make little differences that will matter, eventually.”

For such a memorable album, the reappearance of Cause For Alarm artist Sean Taggart was vital in order to deliver a piece of art that perfectly combined the old school with the current state of the world. Bringing the CFA characters back to life in a new age, the artwork will be familiar to AGNOSTIC FRONT fans the world over, but still maintains a modern freshness. When CFA was initially released in 1986 it was a distinguished and prosperous time for the world of Hardcore, and it is that time, and that vibe, that this album aspires to reassert.

GET LOUD! is compiled of 14 tracks that are nothing short of classic, home grown, NewYork Hardcore, but still includes some thrashy and punky variety. The title track carries a common message for the entire album. It’s a moody and riveting version of “speak up, aren’t you sick of the same day to day routine? It’s time to make that change and stop climbing up that same exact wall. That’s what GET LOUD! is all about.” says Miret. Songs like “ I Remember ” are important glimpses into the lives of the men of AGNOSTIC FRONT and thus tie in strongly with their recent release of Ian McFarland’s Documentary: THE GODFATHERS OF HARDCORE (2017). Although it was written after the release of the film, the track serves almost as a theme song for the documentary in which Miret and founding guitarist Vinnie Stigma recall their pasts and their most groundbreaking records; even first meeting one another. Songs like “Conquer And Divide” speak to the current state of where we as humans are today. “It’s like all the government has ever wanted is to divide the people, and then come in and conquer. I see it happening today; social media is a huge let down in that way. Now everyone has a voice, and I get it, but I can’t believe how quickly some people are willing to jump headfirst into something that doesn’t care about them” Miret explains. “Power of expression, power of the mind, freedom of speech, live free or die, stand up and resist, gotta fight to exist, break down the walls that divide.”

The raw and emotional journey of “THE GODFATHERS OF HARDCORE” can be credited as having some affect on the course of this record cycle. “It was nothing like I expected, it was mind blowing because it was SO US” Miret reflects. “It was pretty incredible to have that, for my family, the future of my family. Put something out there digitally, and it’s out there forever. I’m really happy we never did anything like this, that this is it. It will hold through the tests of time. It’s not just a movie about punk, or hardcore, or metal, it’s about humanity and it’s awesome.”

An old school band in a new era can be an adjustment, but there’s something to be said for the technological advances that have enabled AGNOSTIC FRONT to write this new album, even with distances between the core members of the band. Ideas, lyrics, and riffs were tossed around amongst the guys in a digital universe, and once solid skeletons were formed, the final portion of the writing, the finessing, and the recording began in person. Produced by Miret himself, longtime friend Paul Miner of Buzz Bomb Studios then tracked, recorded, mixed, and mastered the album. GET LOUD! is now arranged, groomed, and ready to make its debut to fans the world over. 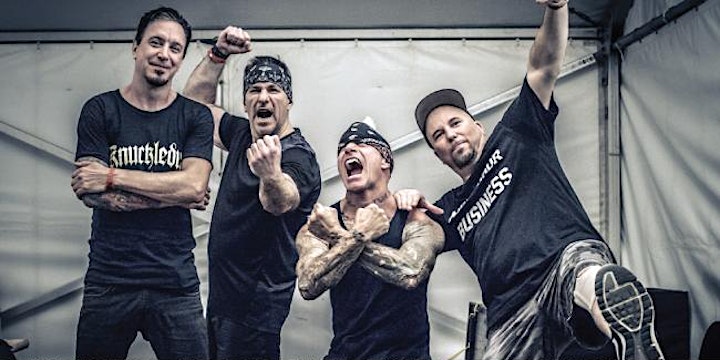