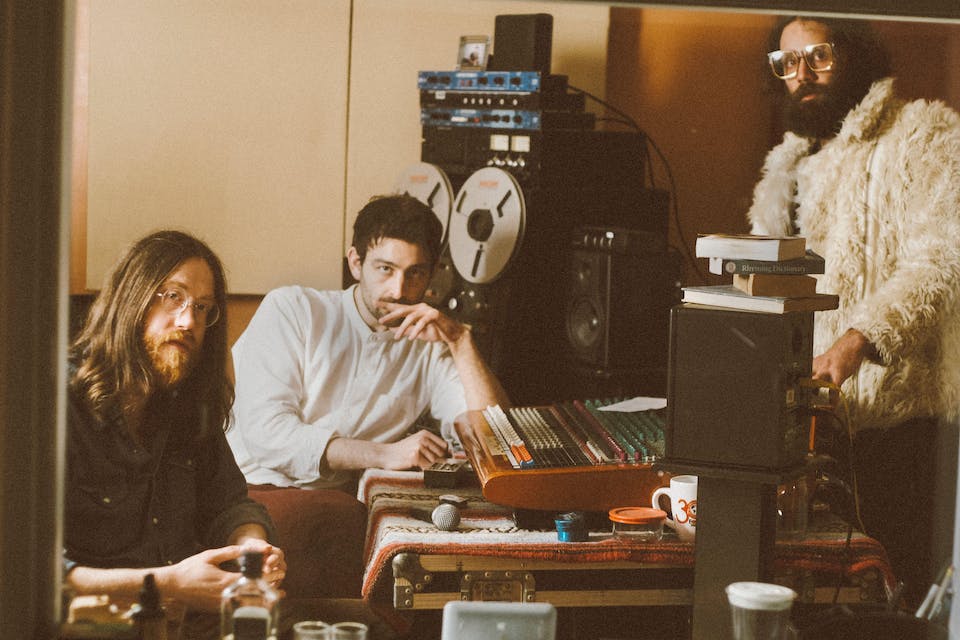 In anticipation of the forthcoming live boxset A Dream in the Dark: Two Decades of Okkervil River Live, Okkervil River will revive their highly popular “Rarities & Requests” show format for one evening only. Release will be on ATO Records.

A statement from Okkervil River's Will Sheff:

In 2017 I started regularly attending Quaker meetings for worship, I spent a lot of time in therapy, and I started microdosing psychedelics. I had asked the band I'd hired to play on my last album Away to be my new band, the new version of Okkervil River, and we'd gone on a long tour of America and Europe that was my favorite touring experience I've had since 2003. In some ways, I felt like a kid again. I realized how phenomenally lucky I am that I've been able to play music for this long.

The election happened while we were in Brussels, on a rainy horrible morning. Crossing over into England later that day, I met a border guard who had worked at the Berlin wall on the night that crowds of East Germans showed up wanting to cross over, when someone on his side had to make a judgment call to open fire or to let everyone through. He told me the story, trying to make me feel better, and I couldn't help crying in front of him. He looked at me sadly, like a nice dad wearing a police uniform.

The new band had a recording date booked to work on songs while we were still tight from tour, and I had some material prepared but I wanted to write more. And if December 2016 was good for anything it was good for writing new songs. I wrote "The Dream and the Light" at a vacation home adjoining Frank Sinatra's old place in Palm Springs; a friend's father had died and she was treating herself and his nurse to a vacation and invited some friends along. Then I went to the Away cabin and wrote more new songs. We hit the studio and recorded about ten songs in three days, everybody playing together in the room and me singing vocals live. "The Dream and the Light," "How It Is," "External Actor" and "Pulled Up the Ribbon" were recorded during those sessions, as was "Famous Tracheotomies," an autobiographical song about a lengthy hospitalization I experienced as a little kid.

I had intended the new songs to continue in the exact sonic vein of Away, but almost immediately they started to diverge somewhat wildly. The sound was more electric and playful - it was a happy sound, because I was happier than I'd been in years. I decided to keep going in that direction.

I scheduled another recording session for a couple months later and I went back upstate to write more songs in the dead of winter, snowed in, no way to get to town. And then I got back to Brooklyn I started writing songs with members of my band. I've never done that before, written with the band. I love this band. We added another nine songs and recorded those, including "Family Song," "Shelter Song" and "Human Being Song."

On a little tour through the South I decided I wanted to write one last song, something upbeat and catchy. So we gathered together in my hotel room in Charleston, West Virginia the morning after a radio performance and wrote "Love Somebody" quickly before they kicked us out of the room. We hit the road and were immediately held up in traffic diverted for the motorcade from that disgusting Boy Scouts speech.

I kept working on all the tracks until some of them started sounding more finished than others and I had enough finished-sounding ones to put a record out. I wanted to put it out quickly. It's so much more fun that way, and this record is supposed to be fun, and to hopefully make people feel happy.

When I gave these songs to Shawn Everett to mix, he saw something even further in it than I saw and he made all the tracks sing. His production reminds me of my favorite experiences of recording Black Sheep Boy and The Stage Names with the brilliant Brian Beattie, who taught me more about music than anyone I've ever met. But Shawn also brought this new energy to it that elevated it and took it in a direction I hadn't quite known it was pointing in. It was so great hearing the mixes coming back, hearing the whole thing in full, one year of my life condensed into 50 minutes. I was thrilled.

When the album was finished, I moved out of New York City.